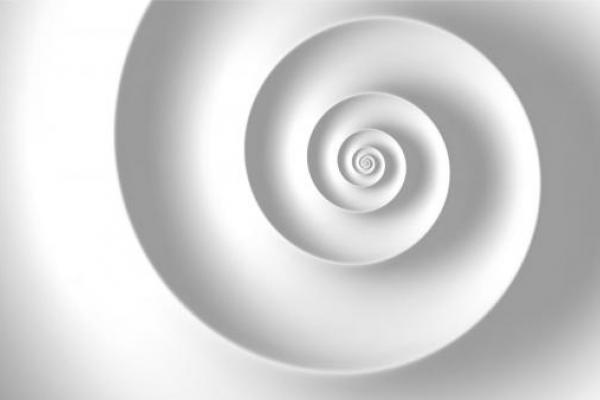 Aug 19, 2020
Tom Tragett
Every trader should have a wide range of instruments to predict market movements. And of course, every trader should know about the Fibonacci indicator instrument. This indicator provides many signals that will help you place profitable trades. However, it’s tricky to put it on the chart so read on to reveal its benefits.

Fibonacci is a commonly used trading indicator used in technical analysis that provides levels of support and resistance. At the same time, these levels can be used as perfect entry and exit points if you know how to use its signals.

In the 13th century, Leonardo Fibonacci discovered a sequence of Fibonacci numbers: 0, 1, 1, 2, 3, 5, 8, 13, 21, 34, 55, 89, 144, etc. If you look carefully, you will notice that every following number is the sum of the two previous ones. What is more interesting is that their ratios stand for the proportions in the universe. For example, a tree branch has a Fibonacci spiral.

How to Calculate Fibonacci

The Fibonacci retracement levels are counted on these numbers. Each previous number amounts to approximately 61.8% of the following number, 38.2% of the number after, and 23.6% of the figure after that.

There is also another figure that is presented as a ratio between any number of the row and the previous one. It amounts to 161.8%. However, there is also a 50% line that takes part in many signals.

Fibonacci tools look like horizontal lines with specific numbers and one baseline that connects two points of the current trend. 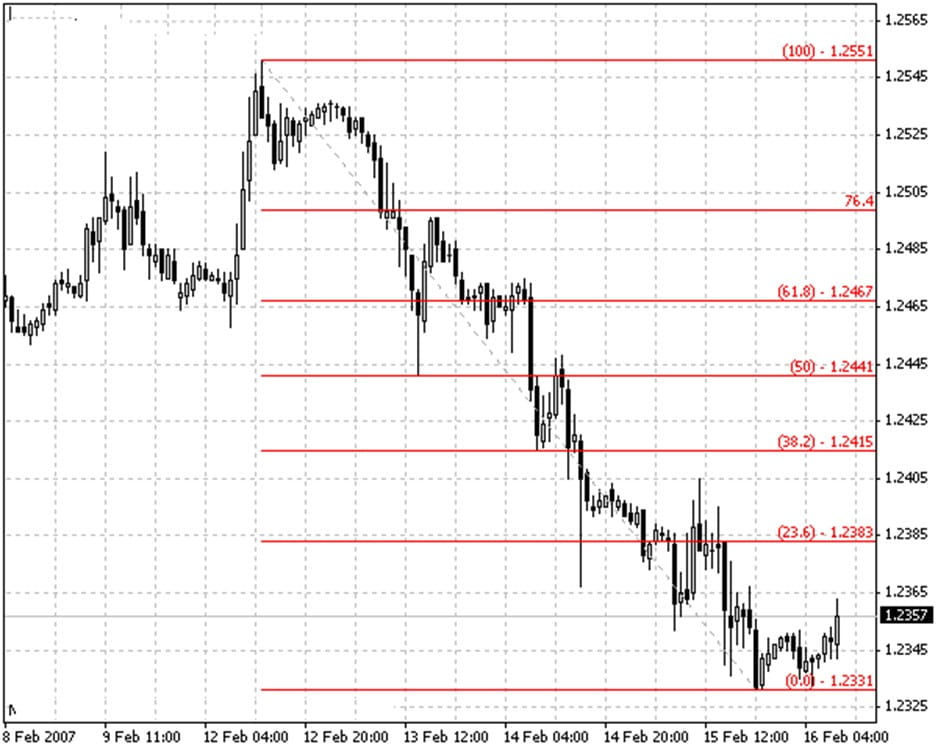 As Fibonacci tools are highly popular among traders, they can be found on different trading platforms. If you use a MetaTrader, find the “Fibonacci” window in the “Insert” tab. There will be a list of tools you can choose from.

One of the advantages of the Fibonacci tools is that they are available for free and don’t require additional downloads.

Fibonacci retracements and expansions are the most famous of the Fibo tools.

How to Use Fibonacci Retracement in Forex

Fibonacci retracement levels are used to predict the price correction against the primary trend.

Consider some signals the levels may provide.

How to Trade Using Fibonacci Retracement

You can trade on Fibo retracement either in an aggressive or conservative way.

A crucial benefit of Fibonacci levels is that you can use them on different timeframes. Thus, you can apply this tool to several Fibonacci charts at once. If the levels converge, the signal is more prominent.

Fibonacci levels are considered as support and resistance points that should prevent further price movement, and usually, the price exceeds them. So, you need to wait for confirmation from other indicators.

Fibonacci Retracement and Other Indicators

Fibonacci retracement levels are reliable levels for entry and exit positions. However, like any other instrument, Fibonacci tools don’t guarantee 100% success. We recommend combining their signals with other indicators.

Fibonacci tools don’t guarantee 100% success. That’s why you should combine them with other indicators and patterns.

We mentioned the most famous levels of the Fibonacci retracement that end up with 100%. But what if the price moves beyond it? There is a Fibonacci expansion tool.

What Is Fibonacci Expansion?

If you want to use Fibonacci expansions, you should know about two waves.

In general, three points are required to implement the tool. You need to determine the start of a new trend. After, you will need to find a higher low if you trade in the downtrend or a lower high in case of the uptrend.

Let’s consider an example. We have a price chart and we connect points A and B which determine the strength of the trend. After that, we need to select the Fibonacci tool again by clicking on the baseline. We draw the second line, dragging the line to the third top or bottom (C point). All three points should be connected. 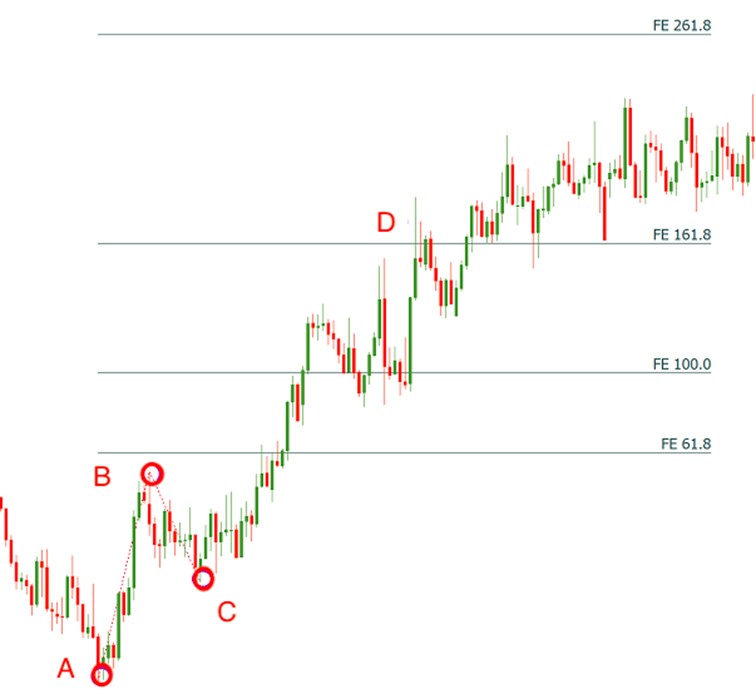 How to Trade Fibonacci Expansion

There are two points where you can open a position.

Although the Fibonacci tools are widely used by traders, some limitations should be considered when applying this instrument.

Previously, we mentioned how you can use Fibonacci tools to enter and exit positions, but there are other strategies you can apply to your trading.

As we said above, it’s never enough to use Fibonacci tools alone. To get a confirmation, you can use candlesticks. As the main idea of the Fibonacci level is to determine price corrections, you should use reversal candlestick patterns that will confirm the correction.

Trade in the uptrend

Step 1. Find a strong uptrend. Draw Fibonacci levels from the lowest to the highest levels. 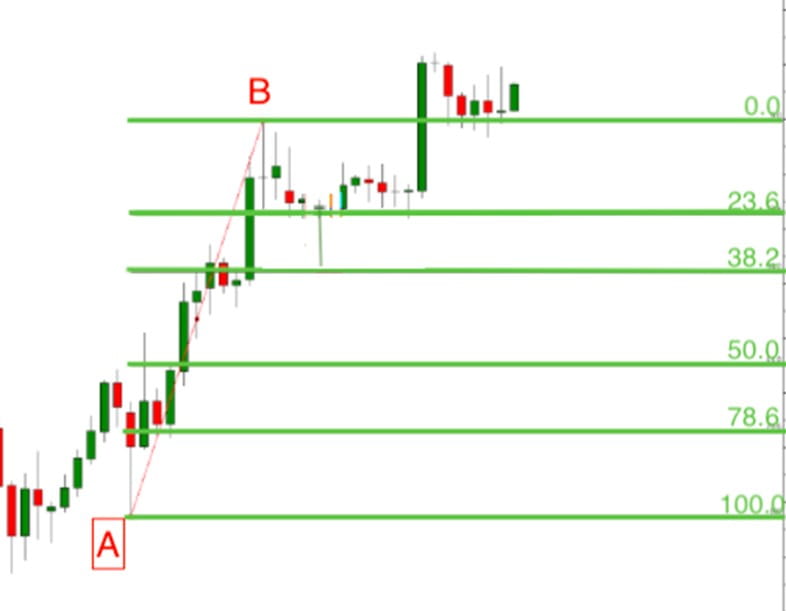 Step 2. Wait for the price chart to form the bullish reversal pattern, i.e. hammer. Enter the market with a long position. 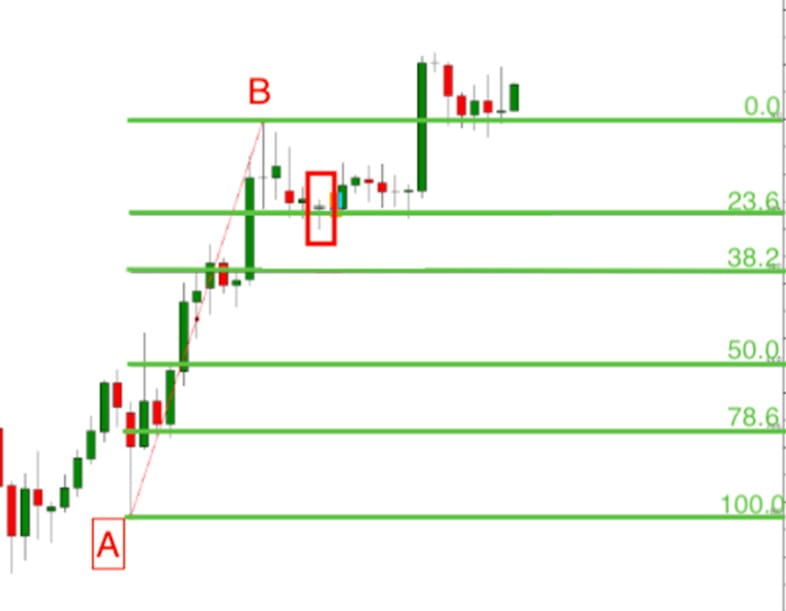 Step 3. The price target should be placed at a 161.8% Fibonacci extension level. To find this level, you need to draw a line from point B (the highest point of the trend) to the low of the hammer candlestick. 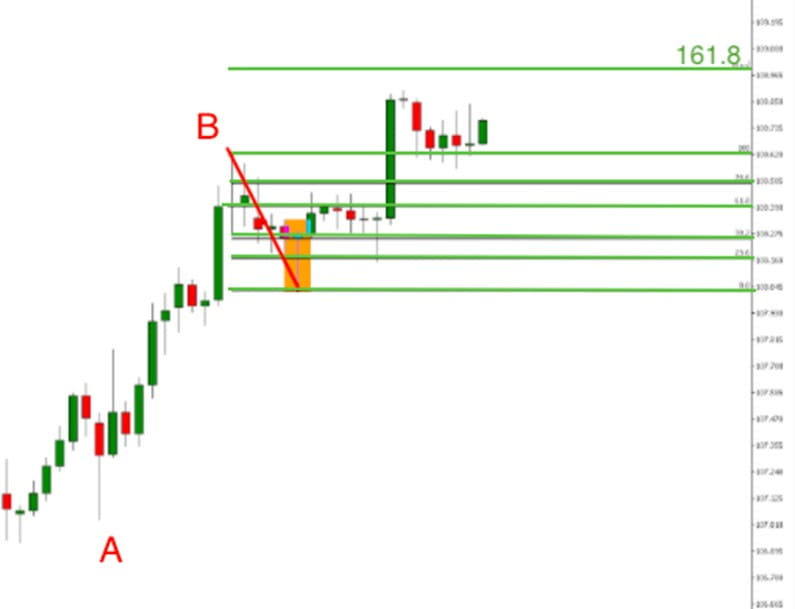 Step 4. Place stop loss. The market can always move in the opposite direction. Thus, it’s crucial to place a stop loss level (1). The stop loss should be placed below the entry point. 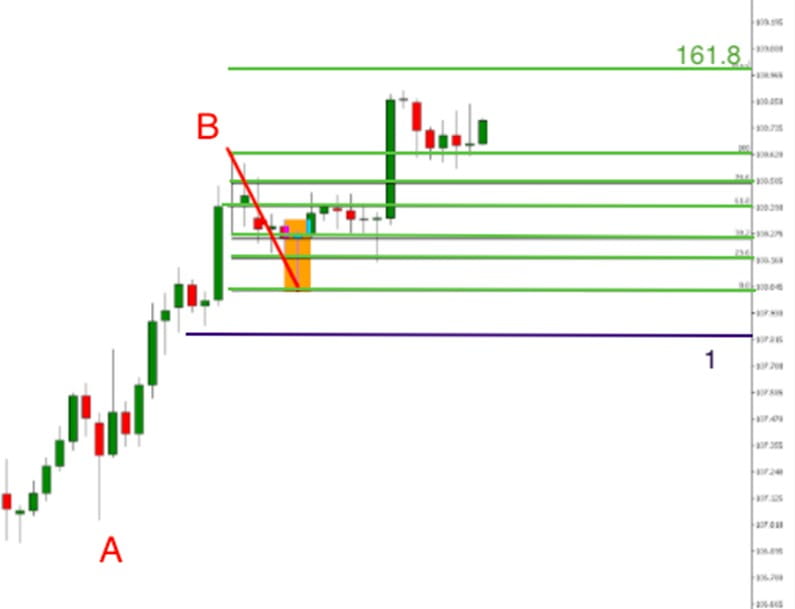 Trade in the downtrend

You can apply the same strategy to the downtrend.

Step 1. Find a strong downtrend and draw the line from the highest level to the lowest level of the trend.

Step 2. Wait for a bullish candlestick pattern—for example, a shooting star. Place the sell position at this level.

Step 3. Place the take profit order at 161.8% Fibonacci extension level. To get the 161.8% level, you need to draw the second line from the lowest point to the level of the candlestick.

Step 4. Don’t forget about the stop-loss order. Place the level above the reversal candlestick.

Fibonacci tools are one of the most reliable instruments for Forex trading. They allow you to determine strong support and resistance levels together with the perfect entry and exit points. However, like any other indicator, they have drawbacks.

It’s not easy to draw Fibonacci levels. To know how to place them correctly, you should practice your trading skills. A Libertex demo account allows you to draw as many Fibonacci levels as you want. Also, you can check whether the signal would work on the previous price movements.

Here are answers to some of the questions you still may have.

What Is Fibonacci Trading?

Does Fibonacci Work in Trading?

Sure, Fibonacci tools are one of the most reliable trading instruments. Fibonacci levels represent strong support and resistance levels along with crucial entry and exit points. However, you should always remember the signal confirmations.

How Do You Use Fibonacci in Trading?

There are two main instruments traders use. These are Fibonacci retracement and expansion levels. These levels determine support and resistance levels.

Why Is Fibonacci Important?

Fibonacci is used not only as a separate instrument but in a famous theory, like that of Elliot Waves. Fibonacci determines strong entry and take profit points.

What Are the Fibonacci Retracement Numbers?

What Does the Fibonacci Spiral Mean?

The spiral of Fibonacci is a sequence of numbers that starts from zero. Every following number is a sum of two previous numbers. These numbers are used to calculate Fibonacci levels.