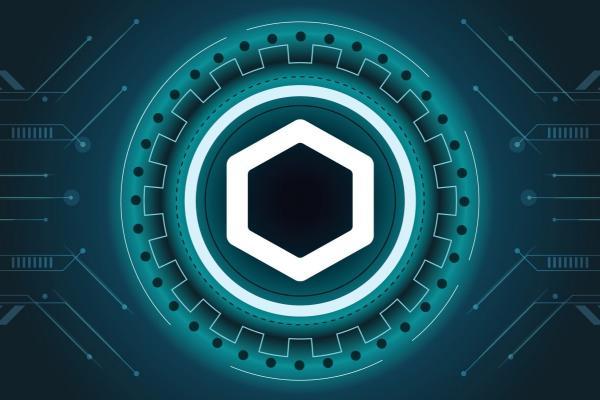 Chainlink Price Prediction: Is It on Track for a Bull Rally?

May 04, 2022
If you've recently watched the crypto charts, you can see the growing popularity of many coins, including Chainlink (LINK). While so many assets are on a bull run, that question becomes: how long will it last?

In this article, you'll see the Chainlink price prediction for the short term, covering 2022 and 2022. But beyond that, you'll also see what's in store for LINK in the distant future: 2025, 2030 and even 2050. To avoid fixating on historical data alone, we'll be looking at fundamentals and factors affecting the coin's value.

What Is Chainlink (LINK)?

Chainlink is a decentralised oracle network built on Ethereum. It connects off-chain data sources, such as APIs, data feeds and bank payments to on-chain smart contracts.

For example, a payment will only be released if a certain amount of Ether is deposited into a smart contract by a certain date. Otherwise, it'll be returned to the sender. Since smart contracts exist on a blockchain, they're immutable (can't be changed) and verifiable (able to be checked by everyone).

The Chainlink network launched in 2017, with the first version appearing in June and Chainlink's white paper from Steve Ellis and Sergey Nazarov coming in September of that year.

In late March 2021, the crypto asset's market capitalisation was steadily moving towards $11.5 billion, with 350 million tokens currently circulating. The LINK token has many purposes, but its main function is to compensate node operators and allow staking to incentivise good behaviour.

How Does Chainlink Work?

The following process facilitates the communication between blockchain-based smart contracts it services and external data sources:

What Can Drive Chainlink's Price Higher?

Before we delve into the Chainlink price prediction, we need to identify the factors that have the most profound effect on LINK's price. Aside from the obvious ones, like conditions on the crypto market, economic news and government regulations, we've been able to identify the following ones.

Smart contracts are only as smart as the oracles that feed external information into them. If there's malicious code or bad data, the smart contract will produce an incorrect and unpredictable outcome. It's the single biggest problem of smart contracts that Chainlink solves.

The extended functionality of Chainlink's oracle services establishes the project firmly in the blockchain space. Notably, it's the ability to act as the bridge for interactions of several blockchains.

For this, Chainlink even received a shout-out from the tech giant Google. The announcement that they were integrating Chainlink's middleware with BigQuery resulted in a giant price spike for Chainlink. Just the mention of usefulness and real-world application managed to affect the price so significantly.

Last year showed that Chainlink is serious about accelerating smart contract adoption. It's been integrated into more than 300 projects, most of which are in DeFi and blockchain, followed by data providers and nodes. Moreover, Chainlink continues to appeal to more and more developers.

Every integration has further bolstered Chainlink's market cap, and it's probably going to continue. The more projects get added to the network, the more the coin rises in value, especially if the projects grow and scale.

Here are a few examples of Chainlink's recent big integrations:

Generally, as with other cryptocurrencies, LINK's value will remain volatile and fluctuate based on news, rumours and online chatter among traders and miners. The anticipation of traditional, centralised finance slowly shifting to DeFi certainty sparks significant speculative interest around projects like Chainlink.

How Chainlink's (LINK) Price Developed in the Past

The dynamics of Chainlink's price and its volatility can be assessed through the notable events in this project's history:

How Has Chainlink Performed in 2021?

There have been a lot of exciting announcements from the Chainlink team:

This is just a small snippet of news surrounding the project. As it has been the last several months, with every new announcement, Chainlink becomes more and more established in modern-day finance.

Unfortunately, all the upcoming announcements are yet to have an effect on the price. In March 2022, the price chart is red. The downtrend started at the start of the year and moved the price to a humble $13.34 mark. In April, LINK's price fell even lower to $12.27 at the end of the month.

For a better understanding of the price dynamics, we'll cover a few sources.

Our first 2022 forecast comes from Digital Coin Price. By mid-year, Chainlink's price is predicted to reach $17.11 and follow a slight uptrend to $17.48 by the end of it. Overall, there isn't much expected growth. But there might be fluctuations that short-term traders will be able to take advantage of.

Long Forecast shares a more pessimistic Chainlink price prediction. LINK may continue the year in the $13.00-$15.00 price range. There will be no significant price changes and a sharp bearish trend in the latter half of the year.

Let's move to the longer-term Chainlink price prediction. The two tables below came from Digital Coin Price and paint a really positive future for the coin. Since the previous forecasts also ended on an optimistic note, it's only natural that the growth will continue to persist.

Here are the approximate figures for 2023.

The 2025 prediction shows general upside movement (although with a few big dips), backed by historical patterns and fundamental factors.

Below is the Chainlink price prediction for 2025-2030. The forecast is prepared and published by Coin Price Forecast. Just like the previous predictions, the figures are based on historical data.

Based on all forecasts above, it's quite clear that Chainlink is here to stay. Its presence is very likely to be in the centre of the blockchain revolution. The 'Internet of value' is expected to gain massive traction in the next five to seven years. In the meantime, LINK might experience endless appreciation.

What Will Happen with Chainlink in 2050?

The Chainlink price prediction for 2050 is a thankless task. It's unclear what the monetary structure will be reformed to. Not to mention, there's uncertainty in terms of what will be the exchange factor for digital currencies.

Other cryptocurrencies may be facing the extra risks of all their token supplies being mined. But this isn't a problem for LINK as it's an ERC-20 token with a total supply limit of 1 billion tokens. So, the token supply is not going to be as important as for BTC.

The value of Chainlink so far into the future depends on how its related applications mature. Its market value will reflect the blockchain's utility at the time, just as it always does. If the project maintains its relevance in the industry, it'll surely be worth a hundred times more than it is now.

Since Chainlink is so different from Bitcoin in terms of its application, it's not a competitor to the BTC mania. But it always helps to keep track of BTC because if it goes upwards, the market tends to move accordingly.

How to Conduct Chainlink Technical Analysis

First, we'll give you the steps involved in technical analysis. And then, we'll show you the current technicals for LINK and expert analysis to guide your trading.

Below are the tools you'll need to conduct technical analysis on your own.

Right now, Link is looking to hold its support before coming up into the ascending channel. If the daily close moves above the current support, it might climb back up. But if it closes below the support level, we might see a bit of a drop.

Below are the ratings for the monthly chart and the summary for LINK/USD based on the most popular technical indicators.

Every Chainlink price prediction from experts shows a slightly different attitude toward the coin's future. However, we can confidently say that most opinions are optimistic, and here are a couple of examples.

Cryptocurrency analyst and content creator Michaël Van de Poppe is very hopeful about Chainlink despite the dull market. "Recently, we've actually seen strength on the DeFi section, and multiple DeFi protocols have been breaking out left and right, showing strength, through which continuation seems very likely. If DeFi is going to wake up nicely, Chainlink is most likely going to follow through."

A content creator by the nickname @IllusiveTrades noted that his analysis and prediction from February hold up. The support seems to be at $13, showing no signs of an upcoming breakout. 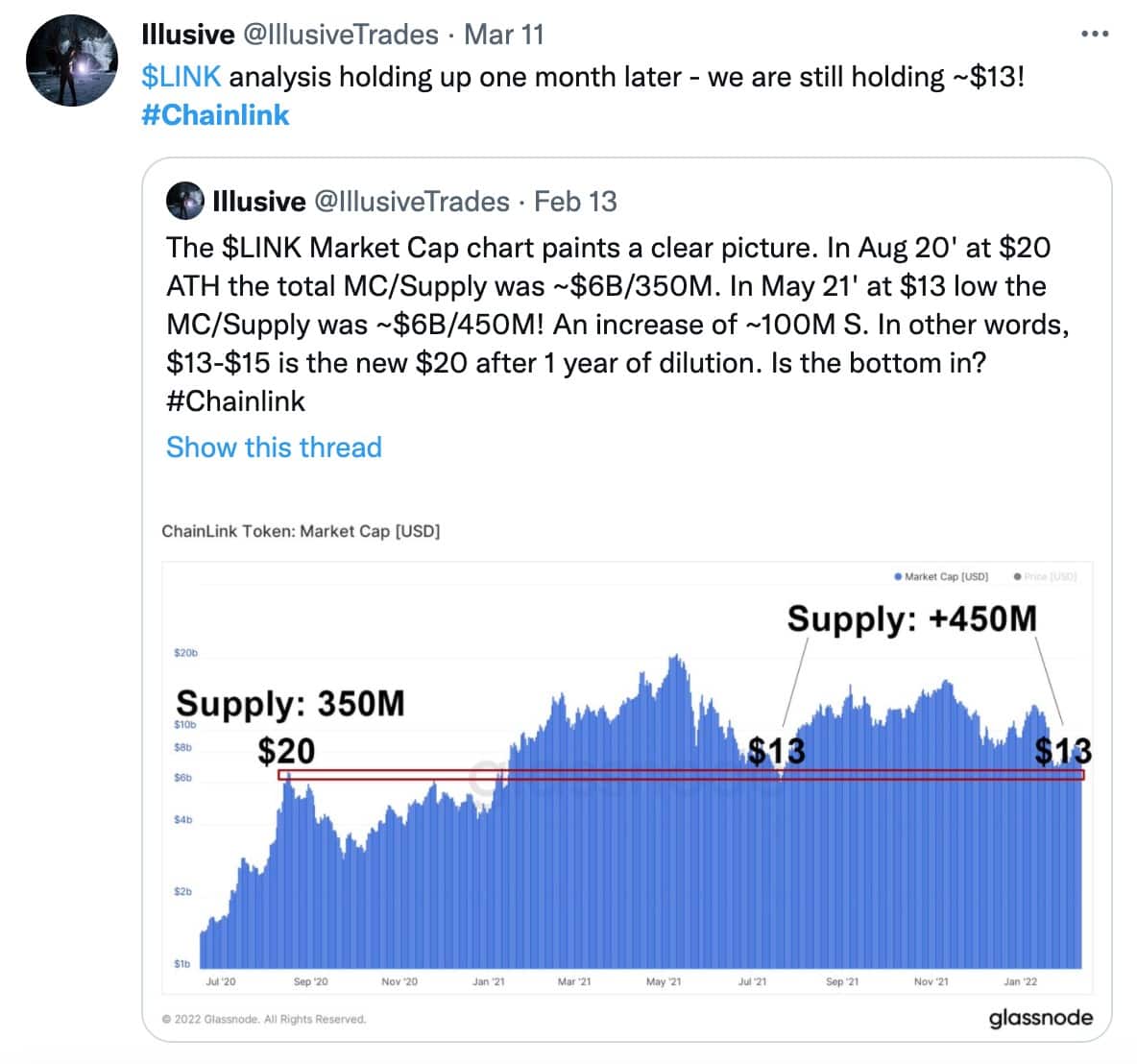 Is It Better to Trade or Invest in Chainlink?

On the one hand, Chainlink is a good long-term investment to keep in your wallet for years. This technology is blockchain agnostic and interoperable. In other words, the infrastructure is compatible with "all leading public and private blockchain environments." As a result, mainstream adoption (if not from individual users, then from new and existing products/services) will be followed by LINK's appreciation in the future.

However, many investors are fearful about putting their funds into an asset for a long time. The crypto market can lead to tremendous wealth and make you lose it all. The decline of an altcoin like LINK is even more heightened. But there is definitely speculative potential.

If you're interested in trading LINK, there's a great opportunity to maximise the results: CFDs. You get the chance to speculate on the price without owning the digital asset while also leveraging your positions.

The best way to get into CFD trading is through a Libertex demo account. Why? You'll get to explore the trading platform and user interface, learn cryptocurrency trading and technical analysis, understand market dynamics and a lot more. Sign up today for free!

If you have any questions left, this section is for you.

Should You Invest in Chainlink in 2022?

Almost any Chainlink price prediction will leave you hopeful for its future. If you invest in 2022, don't expect to make bank in the same year. But if you wait a few years, your investment may potentially pay off.

Can You Predict Chainlink's Price?

Yes and no. On the one hand, you can gauge the fundamentals and hypothesise about the success of future projects. You can also conduct technical analysis or seek a report from experts. On the other hand, it's important to understand the shortcomings of any prediction and the inaccuracies it may involve.

Judging from the Chainlink price prediction for 2025-2030 given above, the coin is unlikely to reach the $100 mark.

Is Now a Good Time to Buy Chainlink?

If Chainlink manages to break through its resistance, the asset will be looking very bullish for the time being. If not, some traders claim that it should still be able to recover in the next couple of years.

Does Chainlink Have a Future?

In theory, smart contract technologies combined with Chainlink can change the business at its core and rebuild our financial infrastructure from the ground up. This is a big statement, but the technology is moving ahead at a rapid speed from what it seems.

In the short term, we may see a bit of a drop. However, in a few years, the project is expected to climb back up and reach new heights as DeFi and oracle services grow.

Is Chainlink a Good Investment?

Chainlink is one of the most prominent cryptocurrencies. A few reasons why it can be a good investment are that it has the right technology behind it, enough resources for further development and an excellent community.