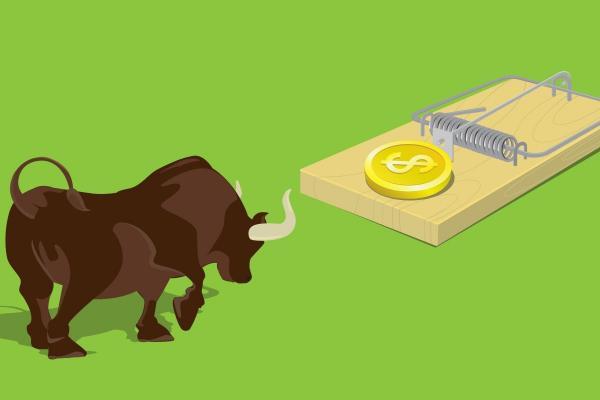 Feb 17, 2021
Tom Tragett
Traders meet with various challenges while trading. Those include high volatility, unexpected events, wrong signals, risky assets, etc. There is another challenge you may face - a bull trap.  The bull trap is a market condition that may cost you a fortune. This article contains a comprehensive explanation of what a bull trap in trading is, shown real examples, and shared hints to avoid bull traps.

What Is a Bull Trap in Trading?

There are many definitions of the bull trap, but we will use the easiest one. Every trader, even a newbie, knows that the price turns down near resistance and moves up near support. Still, when the price manages to break any of the levels, it's a sign of the strong trend that is supposed to prevail on the market.

Imagine the price grows, breaking above the resistance. What is the first thing you have in mind as an investor? Of course, you will buy as the trend promises to be bullish. However, the price bounces and moves down. Congratulations, you are in a bull trap.

There is an opposite situation when the price rises after the breakout of the support line. In this case, you are in a bear trap.

Why Do Traps Occur?

There are several reasons why the bull trap can happen:

So, the main reason for a bull trap in trading is the weakness of bulls that can’t push the price further up.

Let's have a look at real examples of bull traps to have a clearer understanding. 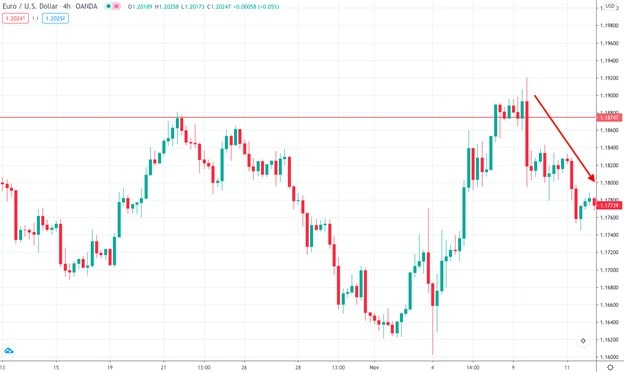 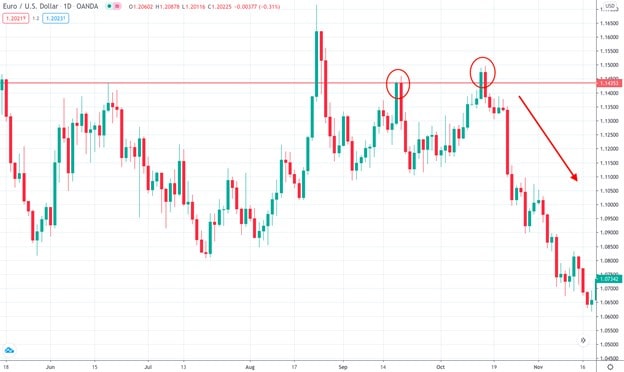 Another example of a bull trap was found on the daily chart of the EUR/USD pair. The price was forming a double top pattern. The price moved above the second top and moved down. After, the solid bearish trend formed. Later in the article, we will tell you more about the double top pattern.

A Bull Trap: How to Identify

As you have already understood, the bull trap is the pattern that can cause large losses. Thus, you should know how to prevent getting into a trap. Here are our tips:

In this part of the article, you will find additional options to determine the bull trap in trading on the chart, noting specific patterns.

You should know that one of the easiest patterns is a double top pattern. It's formed before the bearish trend. The idea is simple: the price touches the resistance two times, forming two tops, then it starts declining.

In the bull trap case, the price should break above the resistance at the second top and then turn around. It doesn't matter whether it's a bull trap or a classic double top pattern - the price is supposed to decline.

How to Avoid Bull Traps 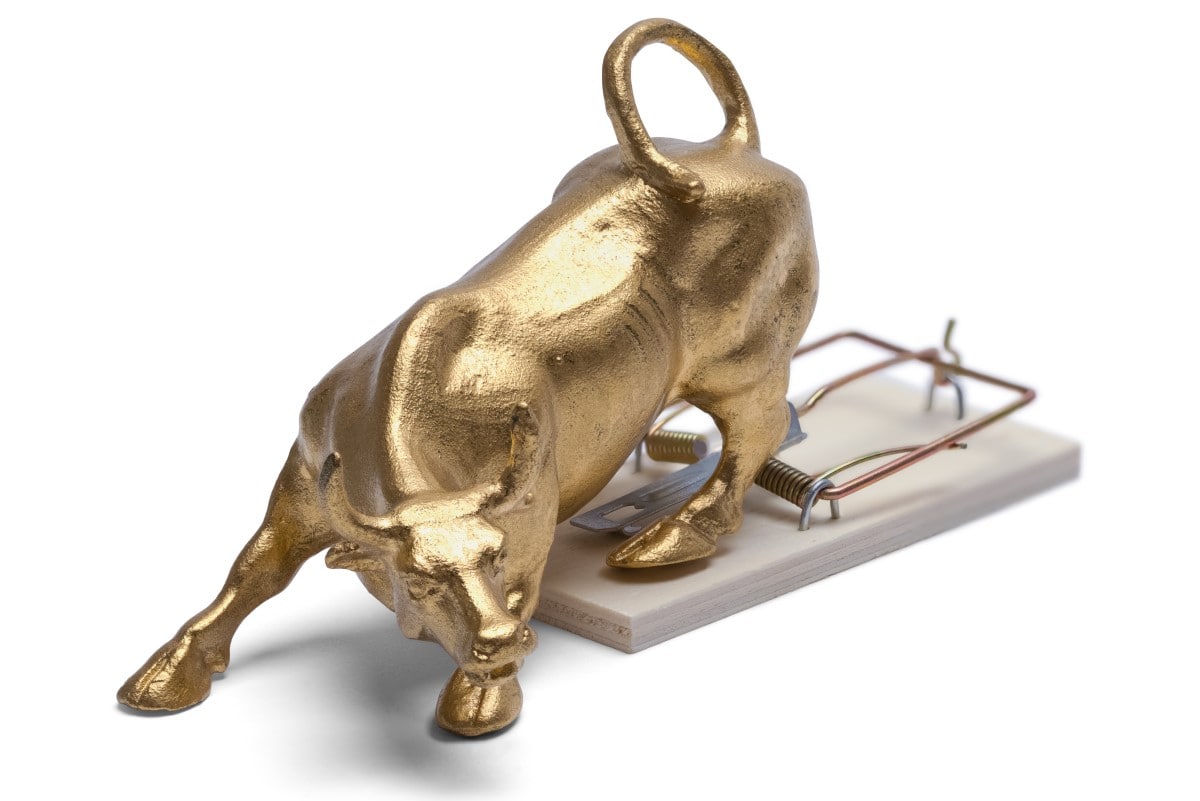 It's clear why you should avoid bull traps – because you are at risk of losing money. Imagine you open a buy position on the breakout but the price declines. You will simply lose. Below we have gathered the most efficient methods that will help you to deal with bull traps.

If you have never heard about the Volumes indicator, it's time to learn more about it. Although it seems that it barely provides trading signals, this instrument is widely used by traders.

There is a well-known candlestick that indicates market uncertainties - a Doji candle. If a Doji candlestick follows the breakout, there are odds of the downward movement as the market participants are unsure about the upcoming price direction.

Method #3. Be Careful with Pending Orders

Method #4. Learn How to Identify Traps Ahead

If you missed the part about identifying bull traps, you should get back to it and practice on a Libertex demo account.

The bull trap occurrence characterizes the end of the uptrend. If you see that the price has been trading up for an extended period (the period depends on the timeframe you trade), don't open a long position. Remember that trend is not constant - it changes from time to time.

It’s better for traders to take time and wait until the patterns confirm the upward movement above the resistance level. Well, you may say that there is a huge disadvantage in avoiding trades. You can miss a perfect entry point if it's not a bull trap but a sustained bullish trend.

That's why we want to share with you some ideas on how to trade bull traps if you don't want to stay away from the market when the price breaks above resistance.

The best feature of trading is that you can both buy and sell no matter whether you own the asset or not. Thus, when the bull trap occurs, it's time to open a short position. The strategy is simple: wait until the market confirms the downtrend and become a seller.

Still, it's vital to be sure the bearish trend is forming. For that, you should follow the next step: 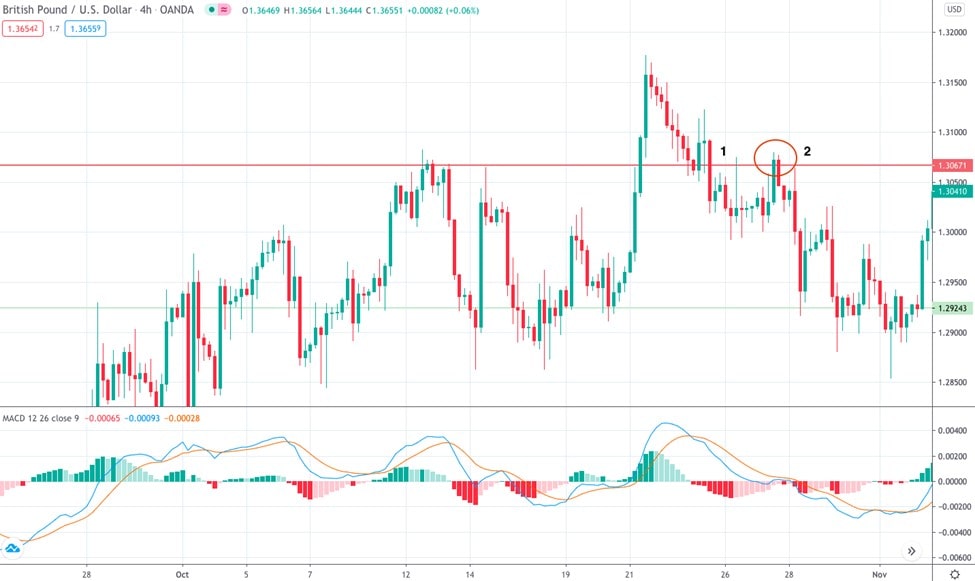 Strategy #2. When Resistance Turns Into Support

This strategy partially relates to the bull trap as it's not formed on a strong downtrend but a temporary price decrease.

Another strategy is to buy when the price tests the support level that was the resistance before. Imagine the price breaks above the resistance but turns around and falls. However, it doesn't slide below the previous resistance that has already become the support. It means that the trend is still strong. Thus, you can easily buy. 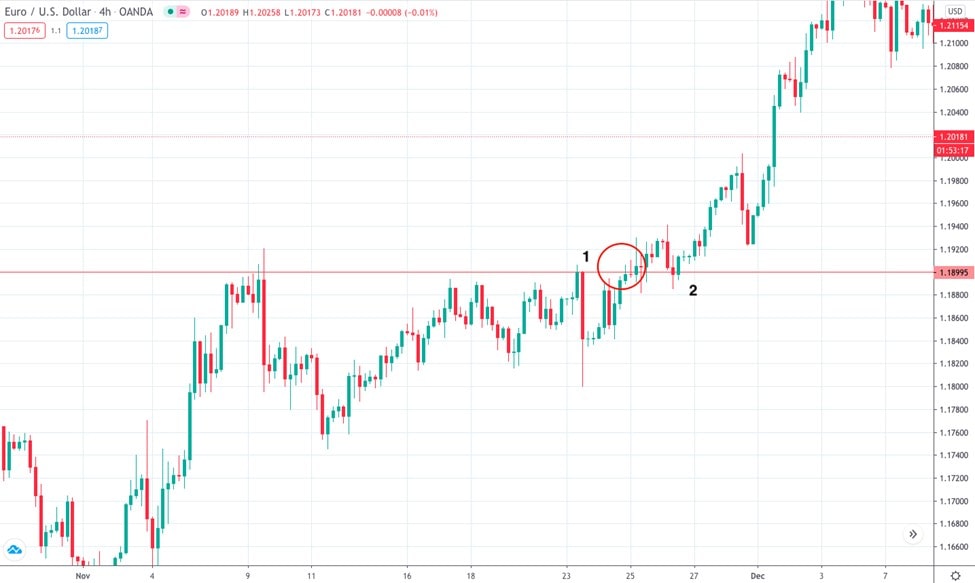 The bull trap is a harmful pattern for traders. Although you can use it in your favor, you better determine it ahead and avoid entering the market if there is any sign of its formation.

It's not easy to define bull traps on the price chart. A mistake can either cause a money loss or a missed opportunity of entering the market at a reasonable price. That's why you should practice daily.

The best option is to open a demo account. The Libertex demo account allows traders to open positions on various instruments, including CFDs, at real market conditions but with zero chance of losing their own funds. Although you won't earn anything trading on the demo account, you will gain skills that will help you in your future trader’s path.

It's time to round up all the knowledge we got today.

What Does Bull Trap Mean in Trading?

The bull trap is a situation when the price breaks above the resistance, signaling a strong uptrend but turns around and declines.

Is the Market in a Bull Trap?

It depends on the market which we consider. There are plenty of assets, and there are many markets - conditions differ on each of them.

How Do Trapped Traders Make Money?

Although the trap is an unpleasant situation for traders, there is an opportunity to win if you know some secrets. Go back to the "How to Trade Bull Traps: Top Strategies" part to learn the best strategies.

What Is a Bull Trap in Crypto?

The bull trap in the crypto market doesn't differ from the basic explanation of the bull trap. The bull and bear traps are common market conditions for any asset.