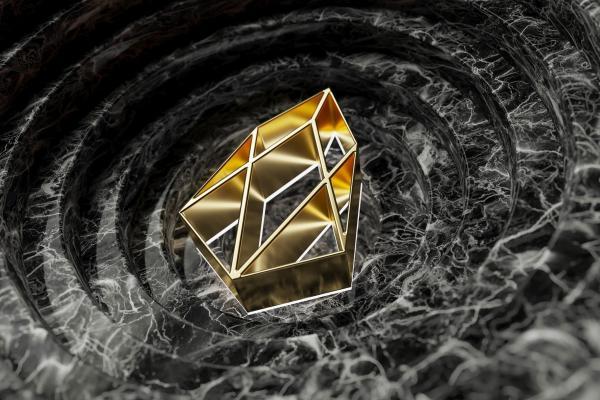 EOS Price Prediction: Where Will 2022 Take This Coin?

If you've considered adding cryptocurrencies to your trading strategy or investment portfolio, you've likely come across EOS. Is this altcoin worth your while? Is it better to trade EOS, invest in it or just leave it alone altogether? Today, we'll take a look at the history of EOS and its present, short-term and long-term price predictions. We'll even show you how to do technical analysis. Let's get started!

If you've considered adding cryptocurrencies to your trading strategy or investment portfolio, you've likely come across EOS. Is this altcoin worth your while? Is it better to trade EOS, invest in it or just leave it alone altogether? Today, we'll take a look at the history of EOS and its present, short-term and long-term price predictions. We'll even show you how to do technical analysis. Let's get started!

Did you know that EOS was one of the most successful ICOs of all time? ICOs, or Initial Coin Offerings, are a way for innovative crypto projects to raise money. Rather than receiving fiat money, ICOs fundraise via popular cryptocurrencies like Bitcoin or Ethereum. EOS's ICO began on 26 June 2017 and lasted for 350 days. Throughout this nearly year-long period, the ICO raised an astonishing $4 billion. With such a promising start, it's no wonder that EOS consistently remains on the Top 10 cryptocurrency list.

Block.one published EOS, and CTO Dan Larimer (who also founded BitShares and Steemit) is leading its development. Direct rivals to EOS include NEO, Ethereum and Cardano. EOS is trying to pull away from the competition with its ability to handle thousands of transactions in a single second, the lack of direct fees, token-holder governance for business and chain maintenance and improved usability for all involved parties.

Overall, though, we can sum up the purpose of EOS in just one sentence: it enables businesses and individuals to develop smart contracts and blockchain-based apps via an accessible and secure online platform.

How Does EOS Work?

EOS's platform, EOS.IO, gives each participant a stake (or a certain amount of power). The exact amount of stake depends on how many EOS tokens they own. Thus, EOS.IO follows the token ownership governance model. Each node, or network participant, can use the delegated proof of stake (DPoS) system to elect representatives for blockchain maintenance. Individuals can make transactions using EOS tokens, which must be approved via DPoS protocol before being recorded on one of EOS's blockchains.

On 15 December 2020, the EOS.IO website released an announcement about the upcoming update to EOS.IO 2.1. Because developments in blockchain platforms can significantly influence the price of their respective tokens, we thought that the new features were worth mentioning.

The main purpose of the EOS.IO 2.1 Release Candidate is to help the platform evolve as a highly scalable, reliable and performant blockchain solution. This release largely focuses on improving the ease with which developers can use the platform to build large-scale applications and then maintain them after deployment. The new product features found in EOS.IO 2.1 RC will include:

So, what are the major implications of this update? Essentially, all of the above-mentioned features will make EOS.IO much more attractive to app developers. That means we can expect the platform to receive lots of new exposure, leading to potential increases in the price of its token, EOS.

EOS partners mentor and support entrepreneurs who are building innovative blockchain projects. These partners include:

As EOS.IO continues to develop, there may be new partners and investors added to this list.

Some of the projects that leverage EOS.IO's technology include:

And many, many more.

As we mentioned earlier, updates to the EOS.IO platform can influence the token's price. However, there are myriad other factors that can influence the price of this altcoin. Let's take a look at some of them.

At the beginning of EOS, 1 billion tokens were created, and, out of those, Block.one retained 10%, 20% were sold off during the ICO, and the rest have been distributed through a continuous sale. The EOS token supply grows by 5% per year.

EOS's infinite nature (due to its yearly increase) means that the tokens haven't reached valuations at the levels of larger cryptocurrencies (think ETH and BTC). Think of it this way: even outside of the cryptocurrency industry, finite resources (e.g., gold) are more valuable than unlimited resources. However, if the demand for EOS tokens increases like, for instance, if the effects of EOS.IO 2.1 bring huge exposure — then the market price would increase correspondingly.

Media reports that put a positive spin on EOS, reporting it to be useful and stable, will contribute to the public perception that EOS is valuable, thus causing its market price to increase. Conversely, negative media attention could damage EOS's public perception and be accompanied by a decline in price.

We can actually see this in practice: just last week, Dan Larimer announced that he left Block.one, the company that built the EOS blockchain's software. After his resignation was made public, the token's price fell by 16%. Even though his formal resignation took place on 31 December 2020, the token didn't decline in price until he published an announcement on his blog on 10 January 2021.

As more mainstream companies start to embrace blockchain technology, the market prices of cryptocurrencies will rise across the board. And if EOS.IO manages to set itself apart from other dApp platforms, its token's price will likely benefit.

Did you know that EOS has the nickname "Ethereum Killer?" That's because it's competing for the same developer and dApp market that ETH is. ETH suffers from transaction speed issues, whereas EOS is highly scalable and has the potential to process millions of transactions per second. What's more, it can do that without transaction fees. If EOS.IO gains the attention of dApp developers who are already using ETH, and they switch platforms, this could cause a significant boost in the price of EOS.

EOS Price Performance in the Past

Now that you have a solid understanding of the EOS.IO platform and its token, let's take a look at how EOS has performed on the market in the past.

EOS has been on the market since 26 June 2017. It first traded on the crypto exchange for $1.03 on 1 July 2017. There was an initial spike bringing the price up to nearly $5 before it dipped back down and moved sideways for most of the rest of the year.

How Is EOS Now?

At the time of the update (January 2022), EOS's current price was $2.74. We want to take a second to show you what a technical analysis for EOS would look like (and we'll show you how to create your own later on in this guide). We'll look at EOS's performance on 10 February 2021. The technical indicators are as follows:

Following this snippet of EOS's performance, let's see how it factors into the bigger picture. Based on last year's correction before the run in 2021, things could repeat on the same scale in 2022. So, the value might be waiting for a large-scale spike in the next few months. We'll provide more details in the EOS price prediction charts below.

EOS, just like the rest of the cryptocurrency market, is highly dependent upon BTC's price action. If BTC has another bull run, EOS may have one, as well. BTC typically has a cool-off period after mega bull runs, which is when altcoins like EOS take over and experience great increases, often tripling prices in just a matter of days.

With COVID-19, the global economy went into hibernation for a few months, which had a negative impact on cryptocurrencies. BTC was sent downhill, and we experienced daily losses as high as 40%. However, the situation stabilised before too long, and BTC brought the entire crypto market back up. So, what does this mean for the EOS price in 2022?

Well, as long as BTC is in the number 1 spot and pulls the market upwards, there's not much room for EOS to shine, but its USD value will continue to rise as the overall market rises. However, the EOS/BTC ratio may slump to all-time lows. This means that it's likely best to remain invested in BTC until it reaches its peak, at which point, it would be safer to consider altcoins like EOS. And, when altcoins are in their prime, EOS will be at the forefront. This is because money typically flows from BTC profits to big cap coins and bluechip altcoins before trickling down to smaller projects.

We can see that the EOS future price might be having trouble for the majority of the year. However, Trading Beasts predicts that the coin will make a massive comeback by November 2022.

Digital Coin Price presents a rosier depiction of EOS for 2022, with an average price steadily staying below $4.00.

The EOS price prediction in 2023 largely depends on 2 things:

Below, we've included a realistic EOS price prediction for 2023. EOS is likely to be in an uptrend while gradually climbing to a higher position by the end of the year.

Predictions for 2025 are so far in the future that you should take any information with a grain of salt. That said, let's take a look at Coin Price Forecast's opinion about the long-term progress for EOS.

We do have one major insight: rather than focusing on what EOS will be worth in 2025, the better question is, will it still be a viable altcoin in 2025? If it manages to last that long, it means that EOS will have found a niche for itself and gained significant mainstream adoption. So, in 2025, EOS will either balloon in value or fizzle out altogether.

What do the experts think EOS has in store for traders? We've compiled EOS price predictions from some of the top crypto industry publishers and traders.

According to Wallet Investor's algorithm, EOS is a good long-term investment. This financial analyst group published a forecast earnings growth chart in which they predict that EOS will see +250% growth in the next 5 years by December 2026.

Digital Coin Price has a similarly optimistic EOS price prediction and to an even greater extent. This publication opines that, by 2030, EOS's price might sit at around $12.50.

Should You Trade or Invest?

While there are still some believers in EOS, the altcoin's future largely depends on if it can overtake ETH. For some investors, this is simply too large of a risk. So, it may be safer to take advantage of EOS's short-term fluctuations by trading rather than making a long-term investment.

One way to get potential profit in a shorter period of time is to trade EOS CFDs. You can open positions regardless of which way EOS moves. But please note that trading CFDs with leverage can be risky and can lead to losing all of your invested capital. Libertex is a platform that allows you to trade EOS CFDs with all the tools you need, and you can even set up a demo account to trade risk-free.

Is EOS Worth Buying?

EOS is a risky investment, so it may be better to trade EOS CFDs rather than adding EOS to your investment portfolio.

Does EOS Have a Future?

Yes, EOS does have a future. That is, if it's able to overtake ETH.

If EOS is still around in 2025, that means it has likely carved a niche for itself and could be worth $6.00+. Some experts have even bolder EOS price predictions putting it at over $20 and $30 per coin.

It's difficult to say whether EOS will reach $1,000. Right now, that is outside of the scope of our predictions. It could take decades for the altcoin to reach such a level.