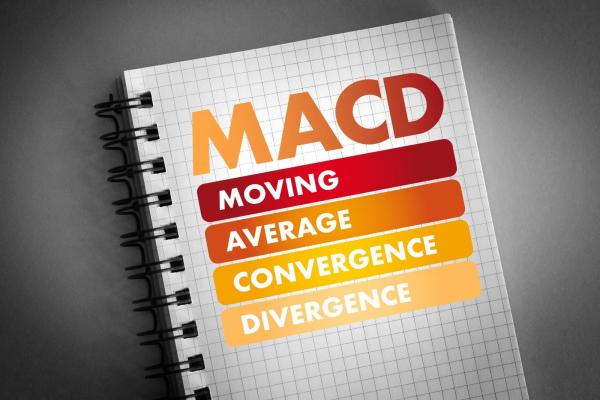 When you ask traders to name a good technical analysis indicator, whether they're new to trading or seasoned professionals, they'll undoubtedly mention the MACD. It's one of the widely-used indicators that has many advantages.

When you ask traders to name a good technical analysis indicator, whether they're new to trading or seasoned professionals, they'll undoubtedly mention the MACD. It's one of the widely-used indicators that has many advantages.

The crucial benefit is that it gives many signals and can be used in different circumstances. Moreover, it's free and doesn't require any downloading. You can simply find it in MetaTrader and apply it to your chart. Let's take a closer look at the best indicator's implementation.

What Is the MACD Indicator?

MACD stands for Moving Average Convergence Divergence. It's a momentum indicator that follows the trend and shows the correlation between two moving averages of the asset's price.

The MACD indicator was developed by Gerald Appel in the late 1970s. The indicator's effectiveness has been time-tested and shown to work.

Look at the picture below. The MACD indicator consists of 2 lines: MACD and signal line, and one histogram (bars). A histogram is used to show the difference between the fast and slow moving average. Thus, when the distance between EMAs increases, the histogram rises. It's called divergence. As soon as moving averages get closer, the histogram reduces. It's called convergence. This explains why the indicator is called the Moving Average Convergence Divergence. 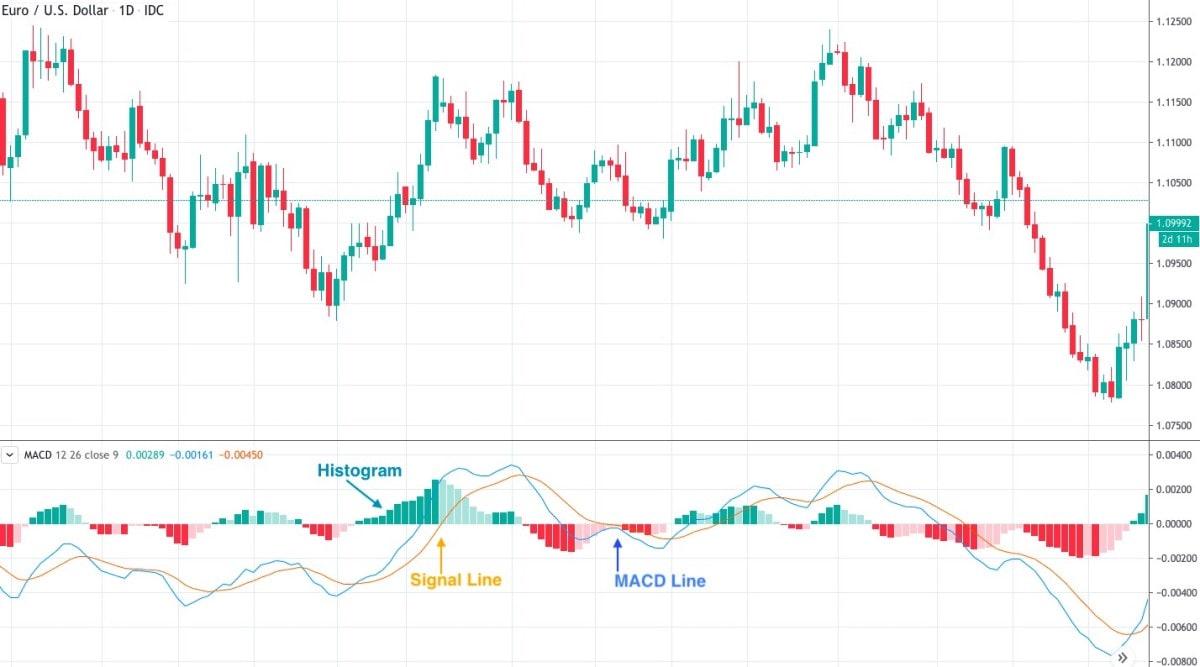 The formula of the MACD is simple. MACD is a subtraction of the 26-period Exponential Moving Average (EMA) from the 12-period EMA.

How to Implement the MACD Indicator

This indicator is a standard tool in MetaTrader. That means you don't need to buy it or download it additionally:

If you use any other platform, it's likely that the indicator will be set by default. If not, you can always download it for free.

How to Read the MACD Indicator

We are at the most important point of this article. Let's look at what signals the MACD indicator gives. 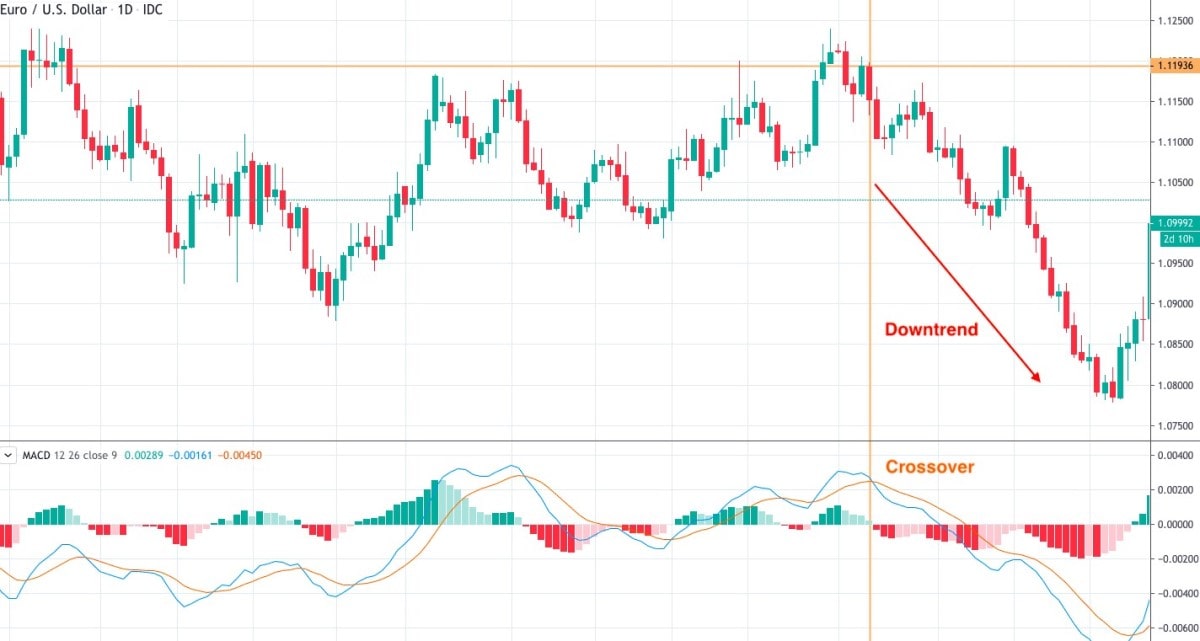 Don't forget that MACD is an oscillator, so one of its functions is to determine market conditions. Both lines will be the crucial point you should consider. If they form significant tops or bottoms, it's a sign of a close correction. There's no need to mention any specific level. You'll understand when the rise or fall is more significant than usual.

If the lines reach the top, it shows that the asset is overbought. Wait for the reversal down. If they form an extreme low, wait for a reversal up. In this case, you can combine the MACD with the RSI to get additional confirmation. 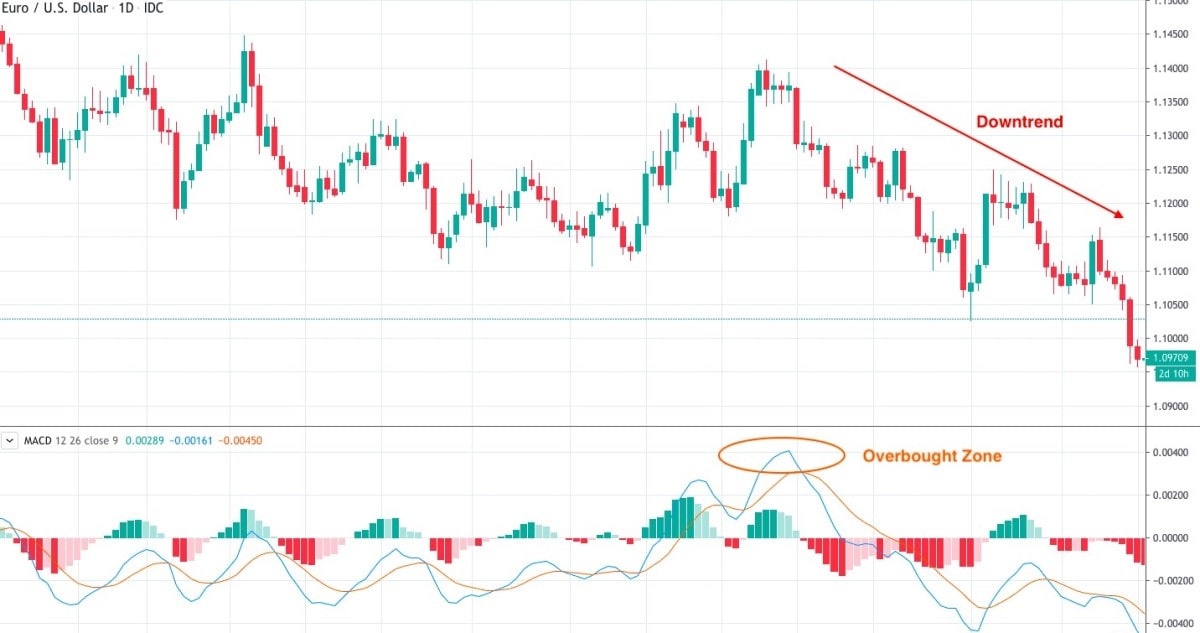 Pay attention to the MACD histogram. If it rises above the 0 level, it's a signal of an upward trend. If it falls below the 0 level, consider opening a short position. However, be careful. The signal works in a strong trend. In times of high volatility, the histogram can move up and down frequently, and that will lead to fake signals. 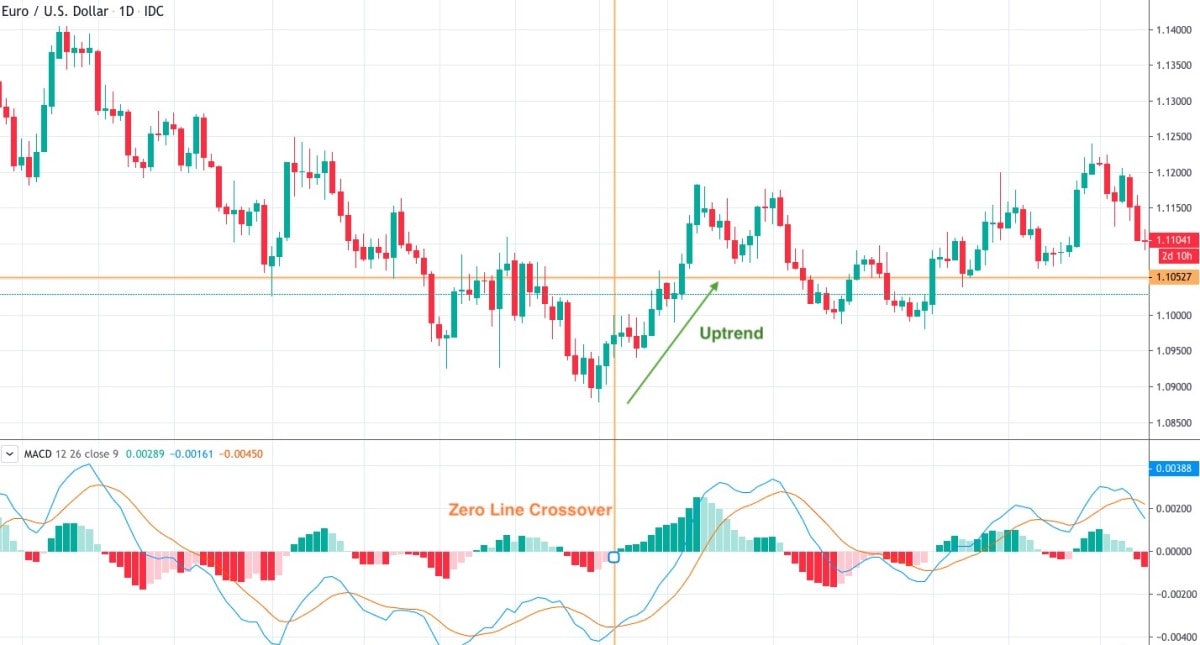 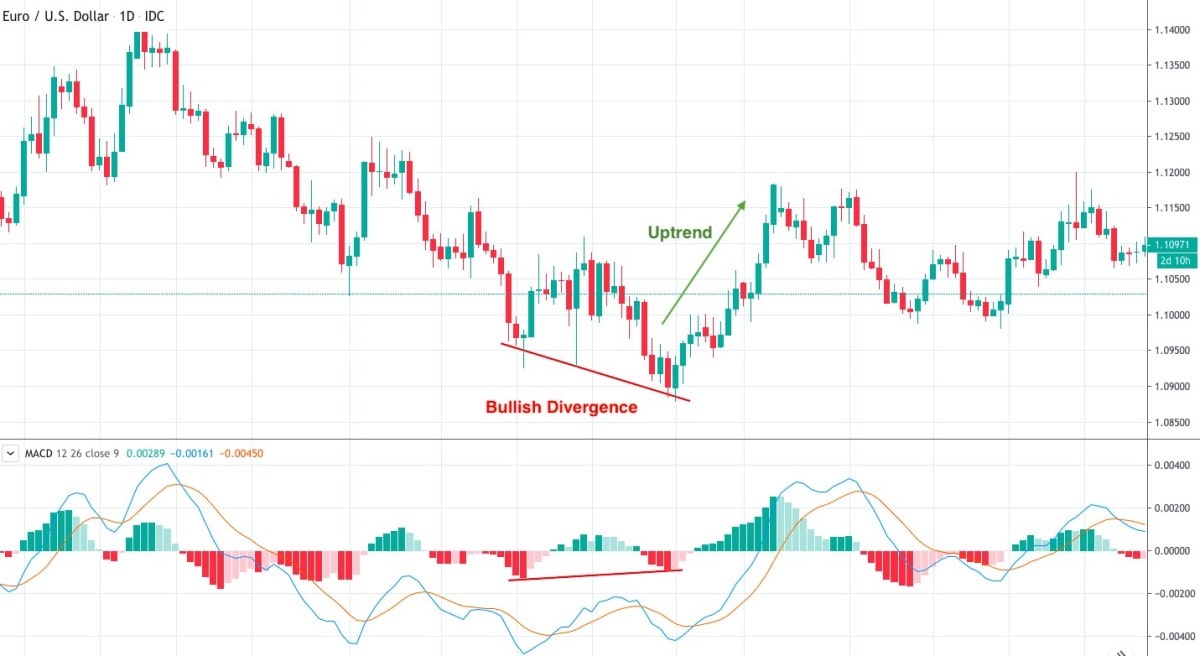 Benefits and Limitations of the MACD Indicator

Everything has two sides, and indicators are no exception. No matter how great the indicator works, it'll have something to affect its effectiveness.

MACD indicator signals traders whether a bullish or bearish movement is strengthening or weakening. It's an important point. By having this knowledge, you'll avoid unprofitable trades. The significant number of the applications makes the MACD indicator an irreplaceable trading tool.

Bonus: How to Avoid Mistakes When Trading with MACD

There's no perfect indicator. Any indicator can give fake signals. However, sometimes the reason is not the indicator; it's the trader's lack of experience and understanding, which create additional mistakes.

The first mistake you can face is the wrong interpretation of the MACD histogram. What does the histogram show? It shows whether the market is bullish or bearish and the strength of either bulls or bears.

Some traders think that when the histogram rises significantly, showing the power of the buyers, it's a good signal to buy. However, it will likely be a late signal. If the histogram shows the strength of either bulls or bears, it means that the recovery may happen soon. Thus, it's too late to enter the current market. The best time to open a position is when the histogram is near the 0 level.

The MACD crossover works well on a strong trend. However, you should remember that the market changes its direction quite often, especially on short timeframes. Thus, the crossover signals will not be accurate if the trend is weak.

Here is how you can use MACD in trading:

You can use the same rules but in reverse to open a short position. 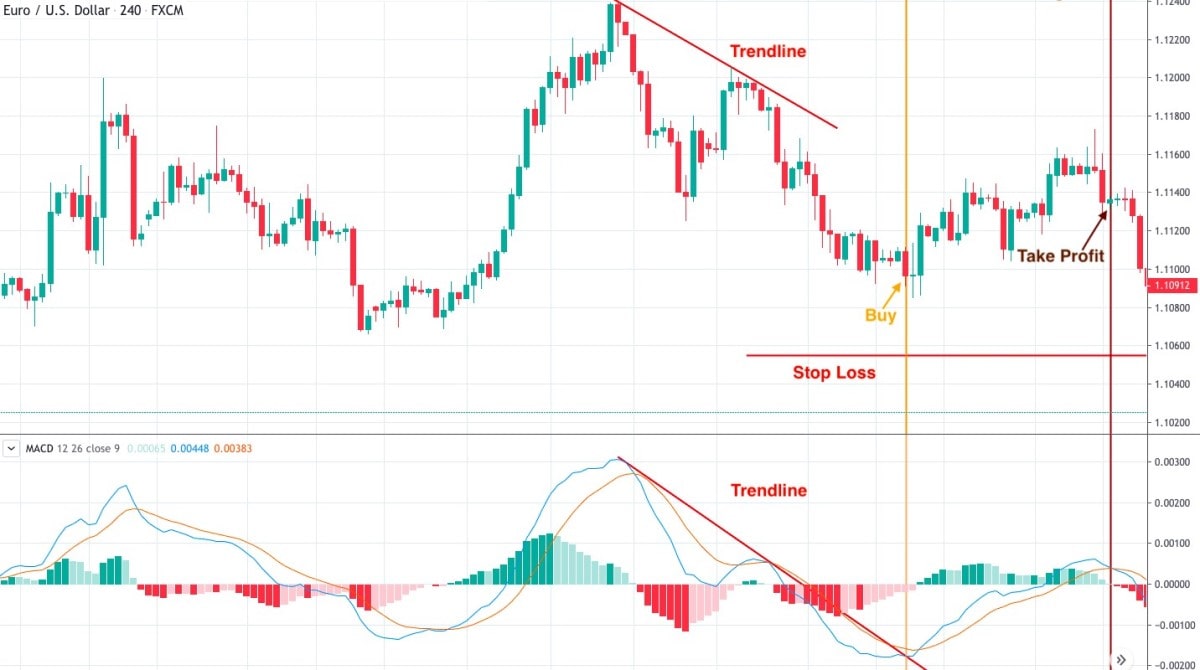 We explained the basics of the MACD indicator. However, you may still have questions. We gathered the most frequent ones.

Which MACD Setting Is the Best?

12, 26 and 9 are default MACD settings. However, it doesn't mean it'll work well in any timeframe or within any trading strategy. It's always better to try different options to find the best one that will suit your trading style.

We can recommend some other settings you can apply. 8, 17 and 9 are just as popular as the default combination. A combination of 3, 10 and 16 can be used for intraday trading. 5, 35 and 5 can be applied to smaller timeframes as they are more sensitive.

What Is the Difference Between RSI and MACD?

If you open MetaTrader, you'll see that both indicators are in the Oscillators tab. That said, they differ in settings and functions. The MACD indicator is based on the Moving Averages. On the contrary, the RSI indicator is calculated by measuring the speed and average price gains/losses.

As for functions, RSI is mostly used for reflecting oversold/overbought conditions, while the MACD indicator is more applied to determine the trend.

What Is the MACD Zero Line?

The zero line or centreline is the middle point of the indicator and is clearly visible on the chart. The line is used for reversal determination. If MACD breaks above the zero line, traders may expect the uptrend. Otherwise, the MACD will cross the zero-line upside-down, signalling the downtrend.

Is MACD a Good Indicator?

Definitely. Despite the disadvantages mentioned above, the MACD indicator is one of the most effective forex indicators. The vast number of signals, convenient implementation and accessibility make it one of the favourite indicators among traders. This indicator is multifunctional. On the one hand, it follows the trend; on the other hand, it forecasts the momentum.

We can say that the MACD indicator is one of the oldest, most effective and straightforward indicators you can apply for trading. The most significant advantage is that it's multifunctional. If you read our article carefully, you remember that there are four situations when the indicator gives signals. Compare this number to other technical indicators, and you'll understand that it's a lot. The indicator can easily be applied to any timeframe. Thus, you can use it for any of your trading strategies.

It's time to practice! Use the Libertex demo account to experience the advantages of the Moving Average Convergence Divergence indicator.