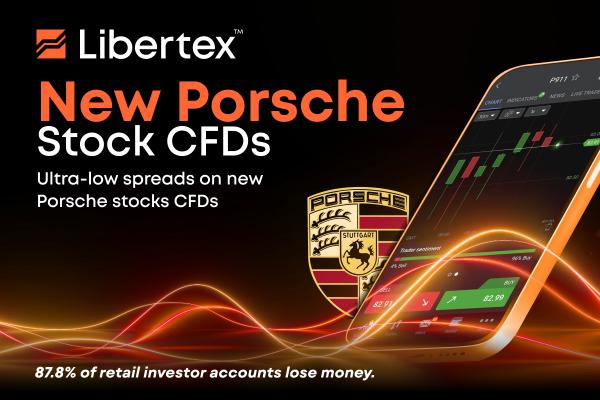 Join the big buzz around Porsche with Libertex

Synonymous with luxury, performance and large amounts of cash, Porsche has probably been what many traders and investors have dreamed about owning at one point or another in their careers. The most successful of them have likely realised that dream already. But now, thanks to one of the most hotly anticipated IPOs of 2022 and Germany's biggest since 1996, even those with a more modest budget are finally able to claim a stake in Volkswagen's premium vehicle brand.

Porsche AG has always held a special place in the hearts of both car enthusiasts and lovers of the finer things in life for its unique marriage of state-of-the-art engineering and unrepentant opulence. However, for a majority of traders and investors, the only way to really own a part of this German automotive giant has been through its parent company, Volkswagen AG. But all that changed a week ago when Porsche went public on the Frankfurt Stock Exchange at a market-defying valuation of €75 billion.

The (not so) big day

Despite the huge interest and successful capital-raising activity by the company itself, it's hard to characterise the IPO as anything other than a let-down for ordinary investors. After the bell rang on 29 September, Porsche AG rose by around 5% during the morning to reach a high of €86.76. By the end of the session, the automaker had fallen back to its issue price of €80.74. While it's far from the utter disaster of Lyft and Uber's pre-pandemic IPOs, it can only be described as a general disappointment given the excitement that surrounded this big-name offering. To make matters worse, one of Volkswagen's biggest shareholders, Porsche SE, saw over 10% wiped off its own share price as holders switched their funds over to the new ticker. Unfortunately, this didn't translate to the gains many investors expected to see upon Porsche AG's Frankfurter Börse debut.

What a difference a week makes

While the stock failed to impress on launch day, it has made steady gains over the week that followed. In fact, Porsche AG's share price currently stands at €87.92, nearly 10% above its issue price. In many ways, this is the kind of steady, sustainable growth that many serious investors prefer over flash-in-the-pan, double-digit gains on IPO day, followed by an overcorrection to the downside in the days that follow. And with a buyer list that includes the Qatar Investment Authority, T. Rowe Price and Norway's sovereign wealth fund, one can be sure that stability and capital security will be a priority for the company.

Although Porsche AG's huge €75-billion valuation was perhaps a bit ambitious in these volatile, trying times, it is only trading at a multiple of 7.2 times earnings. This makes it a veritable bargain compared to its biggest competitor, Ferrari, whose P/E ratio is close to 40. Growth never comes easy in a bear market, but long-term holders of Porsche could well be rewarded handsomely over the coming years.

Whether you think this luxury carmaker is a steal at €87.92 or that IPO stands for "It's Probably Overpriced", you can now go either long or short with CFDs on Porsche AG and Ferrari with Libertex. Our multi-award-winning platform makes it possible to buy and sell with low commission and tight spreads. Libertex is the go-to choice for millions of traders and investors worldwide. Visit Libertex to learn more or to create an account of your own today!